Obvious Child is a film that brings abortion to the forefront of mainstream media and redefines the rom-com along the way. It’s hilarious, genius and refreshing, with relatable characters and a story line that will tug at your heart strings and bring you dangerously close to peeing in your pants from laughing too hard. Unsurprisingly, it has received rave reviews — including one from sherights! — and the unwavering support of the feminist community. Here, we chat with Obvious Child’s writer/director, Gillian Robespierre. Enjoy! 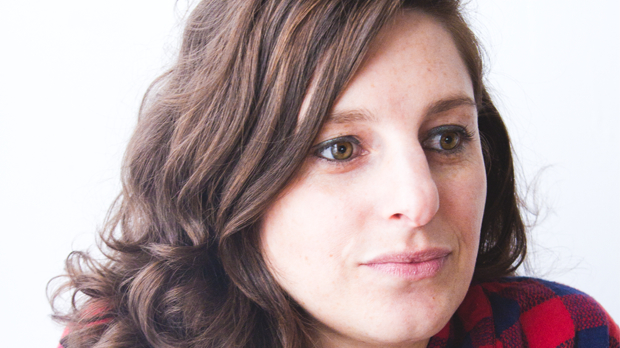 Your film uproots abortion stigma, which is so important considering that 1 in 3 women will have an abortion in her lifetime. Do you have any advice for other filmmakers who decide to tackle this issue, in terms of changing the mainstream dialogue about abortion?

[laughs] I have a lot of advice for them, not just about abortion, but filmmaking in general, like how difficult it is to get your story funded and your crew and getting to the point where Obvious Child is, which is in 200 theaters around the United States. We open in the U.K. in August and have a theatrical release there.

1 in 10 films get to have this sort of grand opening and we’re really excited, thrilled, and proud of this movie we’ve been working on for five years. My advice is that if you want to tell your story, you have to stick to it. Stick to a tone and make sure that you don’t give up.

The feminist community has really rallied around Obvious Child because of its portrayal of abortion, but it’s so much more than that! It’s hilarious and relatable, and left me with warm fuzzy feelings. Did you expect to receive such overwhelmingly positive feedback on all fronts?

I don’t think anyone expects audiences and journalists to connect, just hope they do. The way to do that – to make your dreams come true – is sticking to your own ideas. Jenny [Slate], myself and Liz [Holm, producer], our story writers – Karen Maine – were very thoughtful to our character Donna. We talked constantly about her, and tried to craft somebody who was honest, empathetic and hilarious; as bawdy as she can be, she can be a very gentle person, too.

We wanted to share a deeply human story, which is why we took years to make it. We wanted to dig in. Plus, we all had day jobs, so there was a lot of writing on nights and weekends. It was a real collaboration with incredible women.

We chose the romantic comedy because it’s a genre that we love, and we wanted to modernize it a little bit, taking an honest narrative to the genre. We didn’t write it just for women, even though the genre is so typically for and about women. We really wanted to make sure the male characters to be relatable too and as three dimensional as possible. So we made a romantic comedy and hoped people would relate to it, regardless of gender.

Was there anyone in particular who inspired you to make this film?

It started with my friends Anna Bean and Karen Maine in 2009. Anna was at the New School studying gender studies and Karen was a writing major, and I had just graduated. We were all fans of film, and like everyone, would talk about movies. We found there was a limited representation of a young woman’s experience of becoming pregnant, as well as a representation of a woman who looked like us, who sounded like us, and who had all the funniest lines and the most complex story – especially in a romantic comedy. So we took those two ideas and smashed them together.

But it was really important for us to show the choice of having an abortion, that it doesn’t define her life. We felt that that choice is suffering in silence in our culture, in the mainstream media.

One of the major barriers for Donna’s character is funding, which is something we know many women struggle with when accessing abortion services. Are you using this film to do any fundraising for national abortion access funds?

We worked very closely with Planned Parenthood and NARAL Pro-Choice America and did a lot of word-of-mouth screening with those organizations, and they auctioned off group tickets. NYAAF (New York Abortion Access Fund), for example, raffled off a bunch of tickets to their membership and sold group packages. So each organization is helping us get the movie out there and using it in a fun way to promote safe, accessible abortion.

There was a lot of backlash against NBC Universal, which originally wouldn’t air ads for Obvious Child because they referenced abortion. Which is funny, because that refusal sort of epitomized one of the major takeaways of the movie –that abortion happens and shouldn’t be stigmatized. What were your thoughts about the censorship, and the huge feminist uproar over it?

Just like everyone else, I was a spectator to it. I was getting emails – I’m a member of NARAL and Planned Parenthood – like, “Save Obvious Child!” It was like a play within a play. But it was wonderful seeing the community rally for us. It was really exciting, and it’s great that more stories of all kinds are being told in the mainstream media.

Who is your number one feminist role model?

Like Loading...
‹ Largest Study of Its Kind Reveals that Children of Same-Sex Couples Thrive
Powerful Comic Illustrates One Woman’s Response to Rape ›