CHOICES, Rights and What NOW 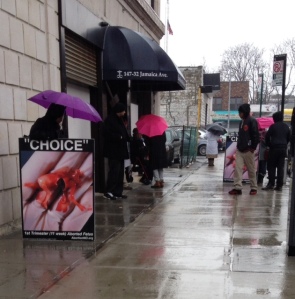 On just about every Saturday at 6:45am, you’ll find numerous 3-feet-tall easels touting full-colored, explicitly graphic photos of butchered fetuses, propped along the sidewalks of Jamaica Avenue.  Depending on who you ask, the photos are either doctored, are of miscarriages or of what they are advertised as: aborted babies.

After months of volunteering as an escort at CHOICES Women’s Medical Center, I’m still not sure whether abortion is actually murder. I say this with reluctance, because I know that many of my peers would be unhappy to hear it. But I say it because a lot of the struggle involved around abortion focuses on the arguments put forth by antis (anti-abortion), while the violent harassment that patients endure is overlooked within the political turmoil.  Each time I step out to face the bitter cold and the even more bitter antis, it is above all, because I am certain that harassment isn’t right. Women deserve access to healthcare without torment. Bottom line.

“Look at me!” She said, “I’m 9 months pregnant.  Do they really think I’m here to get an abortion?!  These people are idiots.”  I smiled and shook my head in quiet agreement.  It isn’t unusual for the protestors to get so wrapped up in their cause, they don’t acknowledge the emergency OB-GYN Medicaid services provided by CHOICES, or the prenatal care or family planning benefits. Instead, they see a woman heavily pregnant and shout at her, “Don’t murder your baby!” as she enters the clinic.  They hear a young girl say she’s going in for a check-up and they scream “Go somewhere else!”, because “other places” take Medicaid.

On another occasion, a Hispanic woman (about my age) charged out of the clinic riled up by what she experienced on the way in.  “I’m going to tell you something RIGHT NOW!  My friend just went in there for an abortion and so help me GOD if any of you talk to her when she comes out, I will punch you in your FUCKING FACE- DO YOU HEAR ME?!”  It was fast and furious, but the emotion forced everyone to lay back… the escorts happy that someone was standing up to these sidewalk bullies, the protestors smug that they had elicited such a profound reaction.

Sometimes women are accompanied by men who typically take a verbal lashing to the tune of “Stand up to your woman and protect your child; you’re a father now.”  I haven’t seen anyone get hit yet, but I’ve seen them come close.

During the most colorful moments of clinic harassment, Robert Parker and his crew will prop a camera at the front door to record women entering and leaving the clinic.  Thomas wiggles rubber fetuses in women’s faces, while “Kelvin of the Cross” plays a recording of babies wailing as he holds up a 5 foot cardboard cross (the root of his nickname) less than 36 inches away from the front entrance of the clinic, begging women, “please don’t kill your baby” and reciting Bible verses.

And it’s not just the patients who are harassed. Clinic escorts are called “death-scorts”, threatened with the “day of reckoning” and compared to Nazi soldiers perpetuating the Holocaust.  We are asked what our commission is, because in the protestors’ warped realities, we are “paid to kill babies.”  Our male escorts are called “fornicators” who what to “have their fun with women and then kill a child.”

If the image I’ve painted doesn’t illustrate a circus, then I’m not sure what will. As I observe what is taking place all around me, I try to imagine under what other circumstances this would be permissible. I can’t think of one. There is neither a schoolyard nor a workplace — or any other type of medical facility — where I can fathom this harassment occurring.  It illustrates the tenuous relationship between the freedom of speech — sophisticated in its brutality, and rancid in its reckless prejudice – and a person’s right to access healthcare, including abortion care, without intimidation. Bullying is increasingly targeted as a social ill among school children, and yet it’s permitted, even condoned, carte blanche in front of abortion clinics.  Under no circumstances should women endure adversity, bullying and harassment in pursuit of her legal right to access reproductive health and abortion care.

40 Days for Life begins today.  Ironically, it is advertised as the celebration of “life,” but let’s be clear: the only life celebrated is that of a fetus. Not the woman carrying it; she is merely a host. And if these “Lifers” are truly concerned with life, perhaps their time would be better spent organizing a rallying cry for social services and support for the unborn they so desperately want to “protect,” instead of harassing women.

On Tuesday, March 11th, NOW-NYC is hosting a Clinic Escort Training program.  Whether you are unsure of your viewpoint, own a strong opinion or just want to learn more, you are invited to join the discussion.  I will be there talking more about my experiences and all that I’ve learned about abortion throughout my journey, with the hopes of shedding light on the procedure, the hype and the “anti” propaganda.

Like Loading...
‹ How Do You Spell “Regret”? I-O-W-A
Women in Film: A Story from the Indie Trenches ›