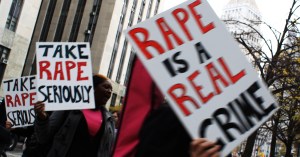 Rape is a horrific crime, one that globally affects women regardless of age, ethnicity, class, religion and race. Sadly, it is a crime that is not always taken seriously or given the same weight as other criminal acts.

Recently, in my beloved New York City, a juvenile justice counselor sexually assaulted underage girls who were entrusted to his care. Today, this sexual predator was found guilty of 12 of the 14 counts with which he was charged.

So, what’s the rub? Why am I dedicating my first post to what seems like an open-and-shut case? Because this guilty verdict is an unexpected, positive twist on an otherwise disturbing course of (in)action.

Originally, Tony Simmons (rapist) was offered 10 years’ probation in exchange for pleading guilty to his crimes. Yes, you read that correctly. Probation for violently altering the lives of young, vulnerable girls. Luckily, organizations like NOW-NYC were outraged and took to the streets to get justice for these girls.

With their “Take Rape Seriously” campaign, NOW-NYC and other activists demanded action from the justice system via letters, petitions and rallies. And it worked. Because we were outraged, because we voiced our concerns and because we refused to let a rapist go unpunished, a judge in State Supreme Court in Manhattan withdrew the probation offer and Simmons stood trial.

So that’s why I’m dedicating my first post to this news: because activism WORKS. And that’s a lesson most of us need to learn. Or re-learn.