Online Misogyny is Good for Feminism

We are the Web 2.0 generation. Our status updates and Tweets contain our innermost thoughts. We check out the political beliefs of potential partners via OkCupid weeks before we even meet them for a coffee. We post pictures of our pets, our sweats, our bets (like this unfortunate soul). We have digital doppelgangers who, whether in our best interest or not, project us onto the digital world.

It’s nearly impossible not to live online, and it’s increasingly difficult to separate our social, professional and private lives, especially when sites like LinkedIn, Tindr and Instagram offer to – or sometimes automatically – synchronise updates across accounts.  Case in point: Everyone from potential employers to potential love interests to my great aunt knows I’m a queer woman thanks to social media. Because of SheRights, they also know I’ve had an abortion and that I’ve been sexually assaulted. Even just last week, I was asked mid-job interview about my abortion. (Creepy, huh?)

Despite social media’s convenience, it can be unsettling to know a potential employer, my tutors, and my classmates know the ins and outs of my reproductive history.

So what do I do? Stop talking about abortion and fall victim to stigma and silencing? Or keep talking about it, aware it will affect my future contacts and relationships?

I’m going to keep talking about it, because in order to remove abortion stigma or the taboo around being a queer woman, I can’t only speak about my experiences in queer-friendly and pro-choice spaces. I have to shout it to the world in order to affect tangible change.

This decision is not without repercussions: Naturally, I am on the SPUC (Society for the Protection of Unborn Children) blacklist, and have had some pretty nasty things said to me, especially in response to my abortion story. Identifying as a feminist online also results in harassment and threats.

But nothing proves how biases from the real world translate online more than experiencing the Internet as a woman—not a feminist, not pro-choice, not queer, but simply a woman. And if you have intersecting identities, well, sorry you’re fucked.

But why should we have to hide our identities for fear of abuse? That, my friends, is letting the bigoted cowards who hide behind avatars win.

The beauty of the Internet lies in its visibility of identities that offer a departure from the dominant White, heterosexual, middle class, able-bodied, neuro-typical, cis-gendered male— vital for creating a tolerant and diverse society, and helping to enable sociopolitical mobilisation.

Whenever I see a self-identified feminist sitting as an open target online, I feel immense pride. Brave and defiant, they post their real names and share photographs online, even in the face of disgusting acts such as this. Rather than retreating into anonymity or using androgynous (or male) identities to escape abuse or simply be treated as equals, we are proudly presenting as female, transgendered, black, fat, what-have-you. Users are holding up identities that can, and often are, used to against them, signaling solidarity.

Online visibility of minority identities isn’t the only thing on the rise. Awareness of the rampant abuse of these identities is, too. Fourth wave feminism, with the assistance of Web 2.0’s transparencies, can demonstrate in real time the misogyny, transphobia, racism, classism, and ableism faced by users on a daily basis—and call for real world change. Tweet why we need feminism, and then sit back and watch the trolls prove your point. It’s as simple as Lewis’ Law.

Need proof? Just log into Instagram and browse ‘Bye Felipe’, which provides an alarming archive of misogynistic entitlement for feminists to validate their complaints. Granted, the vast majority of men who send these abusive threats will probably never be held accountable, but Bye Felipe — and other similar accounts (like the Facebook group Dickheads on Dating Sites, a personal fave of mine) — can act as a cathartic release or a source of solace to women who have been on the receiving end of such messages. It shares the experience. It lessens the blow. It’s the ultimate example of women-supporting-women, and most importantly, it underscores that online abuse lobbed at women isn’t personal; these scumbags abuse indiscriminately. 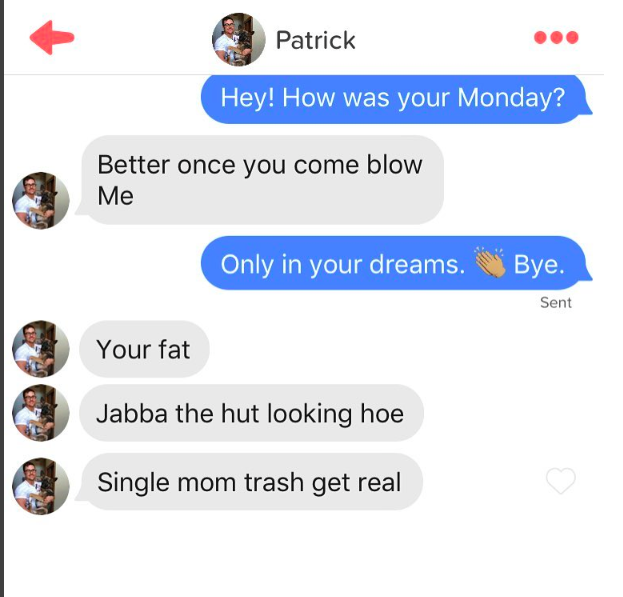 The bottom line: Online misogyny is shit, but it’s highlighting just how much feminism is needed.  And it is mobilizing us to reclaim our rights in yet another male-dominated space.

That said, I know I’m particularly thick-skinned and that if I get a rape threat, I roll my eyes and carry on with my day. But I realize that not everyone can—or should—do this. However, unless we’re visible, we can’t find each other. And until rape threats are a thing of the past, we need to support each other against the onslaught of online abuse in the meantime.

So, I say to women, queers, people of colour, and anyone else targeted: Do not slip away, stand your ground, stay online, and just remember to screenshot.

Like Loading...
‹ Meet The Company That Wants To Make Your Tampons Safe
“Trapped” Provides Terrifying Glimpse Into the South’s Fight for Abortion Rights ›