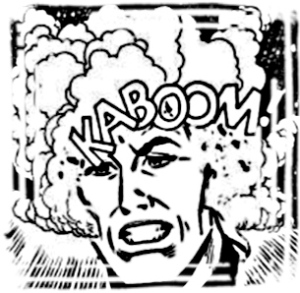 The sound you may have just heard was my head exploding. I’ve previously posted about the No Taxpayer Funding for Abortion bill recently introduced in the House, which at first impression was bad. But bad has quickly escalated to worse.

Mother Jones has shed light on the fact that as part of this bill, the GOP is trying to more narrowly redefine rape and incest in an attempt to limit abortions in those states with rape/incest exceptions.

With this legislation, which was introduced last week by Rep. Chris Smith (R-N.J.), Republicans propose that the rape exemption be limited to “forcible rape.” This would rule out federal assistance for abortions in many rape cases, including instances of statutory rape, many of which are non-forcible. For example: If a 13-year-old girl is impregnated by a 24-year-old adult, she would no longer qualify to have Medicaid pay for an abortion. (Smith’s spokesman did not respond to a call and an email requesting comment.)

As for the incest exception, the bill would only allow federally funded abortions if the woman is under 18.

So let’s get this straight. These are vulnerable girls and women who have been victimized by rape. And then further victimized upon realizing they are pregnant as a result of their rape. And the GOP wants to completely traumatize them by making it even more difficult to terminate their pregnancies, aka the constant reminder of what happened to them? Wow. Hats off to you, Republicans — it takes an impressive level of cruelty and creativity to even think that is acceptable.

Not to mention the consequences redefining rape will have on the thousands of rape victims who survive an attack every year. Under this bill, just saying “no” is not enough to qualify as rape. Drugged and can’t say no? Well, you’re screwed. (No bad pun intended). Date raped? Same deal. Rape victims with limited mental capacity? Saaaaame stinking deal.

Seriously, how is this not completely discriminatory?! This is, at its most basic level, about a specific, vulnerable subset of women being targeted and “punished.” **Head. exploding.**

So, let’s review. If you are a female of reproductive age, are raped, find yourself pregnant and have no means to pay for an abortion, sorry. Sucks to be you.