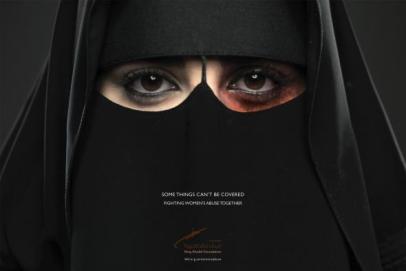 I’m always a fan of powerful, thought-provoking ads (except those that are all rape-y). The first ad of the King Khalid Foundation’s No More Abuse campaign in Saudi Arabia is a great example. The ad (pictured above) features a visibly battered woman in a burqa with the caption, “Some things can’t be covered. Fighting women’s abuse together.” It really packs a punch (bad pun intended), as well it should: the country ranks number 131 out of 148 in terms of gender parity, according to the 2012 Global Gender Gap Report.

Saudi Arabia — where women must have a male guardian — is plagued by domestic violence, which often goes unreported. This isn’t surprising, given the country’s political, economic and social institutions that systematically deny women rights (ahem, voting, driving cars, inheritance…the list goes on. And on.). It stands to reason that when one is barred from participating in political life and is greatly restrained in the public sphere, empowerment within the home is nearly impossible to realize.

Hopefully this campaign will continue to draw attention to the issue and help make a positive impact for the women of Saudi Arabia. It is worth noting that there are other rays of hope on the horizon; in 2011, King Abdullah declared that women can vote in 2015 (hopefully rhetoric will translate to action), and the kingdom’s religious police recently lifted a ban preventing women from riding bikes (although they still must be covered from head-to-toe and be accompanied by a male). The latter may sound silly to Western feminists, but in a country where women must obtain the permission of a male relative to so much as open a bank account or travel, each and every baby step counts.

That said, the global community should not heave a sigh of relief over these baby steps; there are serious leaps and bounds to be made. It is incumbent upon the international community to pressure the Saudi patriarchy to abandon its medieval view of women and discriminatory practices. Saudi women deserve freedom — freedom to and freedom from.