Here in the UK, we have a daily publication that is an amalgamation between a national newspaper and a lad’s mag. The usual newspaper set-up exists – sports and horoscopes at the back, headlines at the front, and opinions in side-lined columns. However, it also has images of topless glamour models gracing the third page. Indubitably, I’m talking about The Sun’s Page 3.

Feminists have been campaigning for the removal of topless women from the newspaper since the 70s, however a surge in dissatisfaction with Page 3 has risen since 2012 with the founding of the “No More Page 3 Campaign”. Rupert Murdoch, who owns News Corp, of which The Sun Newspaper is a subsidiary, tweeted this week that he thought Page 3 was “Old Fashioned” and hinted that he will, in fact, listen to the calls of the campaign and dissolve the feature.

The possibility that the No More Page 3 campaign may be reaching its goal is of course, fantastic. However, there are many people who remain uncertain, particularly when it comes to issues of slut-shaming and censorship. For those falling into this category, or for those ardently against No More Page 3, I have debunked the most common arguments

Page 3 was referred to in 2010 by Jane McDonald on daytime television show ‘Loose Women’ as part of a “British institution”. Similarly, The Sun’s editor Dominic Mohan in 2011 said that Page 3 had become a “part of British society.” This argument is intellectual laziness at its finest. Not only does this reduce the readers to an infantilised state in which change is oh-so-scary, but it neglects to realise that a sexist issue being institutionally accepted does not alleviate it from sexism, but rather reinforces that institution’s sexism. This argument boils down to “Sexism is okay because society is sexist” and disregards that institutions can – and do – change.

Edwina Smith of The Daily Telegraph has justified Page 3 via the “freedom of expression” argument. However, like many before her, she has limited the fight for expression only to men who run the newspaper or the readers who wish to gawk at the images. The girls posing, she hypocritically states, have simply “exchange[d] their dignity for a shot of fame a few hundred quid” and we should hold the models up to our daughters “not as role models but as cautionary tale[s]”. Smith has created a catch 22 – she supports Page 3, but not the girls who pose for it. Smith monumentally slut-shames the models whilst echoing the patriarchal concept of expecting sex workers to be readily available at men’s disposal, whist simultaneously expecting them not to exist.

An anonymous glamour girl called into Loose Women in 2010 in defence of Page 3. She argued that as her way of life, it enabled her to provide for her daughter. She went on to complain about the stigma attached to the profession. However, the No More Page 3 campaign does not condemn sex work; it merely campaigns for the separation of soft pornography with child-height sold newspapers. Many No More Page 3 supporters are also pro-sex work feminists (myself very much included!)

The objectification of an image does not positively correlate to its explicitness. No More Page 3 is about the placement of the image, not the content. And, when you think about it, the juxtaposition of women standing topless against reports of men running the world sure does put women in their patriarchal-determined place.

Earlier this year I had the privilege of meeting Lucy Holmes – the No More Page 3 campaign founder. Holmes stated that she began the campaign after noticing that, despite the achievements of Britain’s women athletes in the 2012 Summer Olympics, the largest photograph of a woman in the nation’s biggest-selling newspaper was “a massive image of a beautiful young woman in her knickers.” The fight against Page 3 is not a fight against the image of breasts, but rather the message that image sends: that breasts define a woman’s entirety. 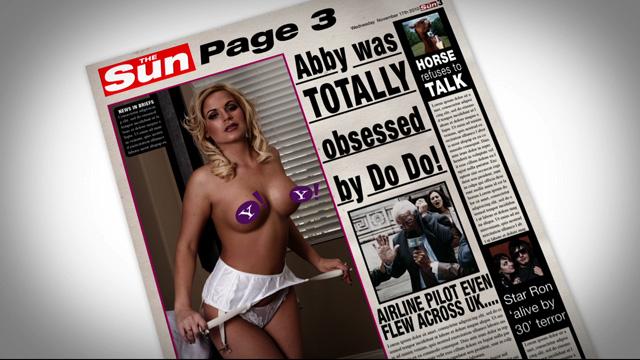 Free the Nipple is another boob-focused campaign. Seemingly opposite, this one protests the censorship of the female nipple in public, especially for women wishing to breastfeed. However, if you dissect both campaigns, their ultimate aim is shared; the public desexualisation of breasts in society.

Both campaigns want an end to the unnecessary hoo-har over boobs and for women to stop being objectified because of them. The campaigns both look at equality – Free the Nipple states the inequality and unfairness that men can be shirtless without penalisation and NMP3 states the inequality and unfairness that men are featured in The Sun without objectification. NMP3 is demanding that a highly sexualised newspaper feature showing a new pair of breasts each day to be stopped and Free the Nipple wishes for women’s breasts to stop being deemed indecent   Both wish for women to be seen as more than their breasts.

Last year David Dinsmore said that Page 3 will stay because it’s a “good way of selling newspapers” . I would argue that if a newspaper was of any quality, it would be able to sell without ignorantly attempting to tap into a perceived animal instinct of its straight male readers. I have also heard that the paper will not sell without Page 3. This is perhaps an even more infuriating argument, given that The Sun not selling isn’t really anyone’s problem but Rupert Murdoch’s. I mean, come on, your sexist newspaper won’t sell without its sexism? My heart bleeds. Despite not caring about The Sun’s sells, banning Page 3 is actually an opportunity for the media giant to make more money by recognising the feature as inappropriate for a family newspaper and selling the topless section as an extra supplement for the readers who actually want it.

In another gem from Edwina Smith (see point 2), she compares Page 3 with homosexuality and interracial relationships, believing that Page 3 has no harmful effects and that “anyone who disagrees …has the freedom to simply refrain from engaging.” Of course, she neglects to consider just how difficult it is to avoid a national newspaper that sits comfortably at eye-level in all newsagents, in coffee shops and on waiting room tables. She also overlooks that wide-spread social issues, such as the objectification of women in media, cannot – and should not – be “refrained from,” but rather analysed, addressed and reformed.

Yes, it is, but at least their article features have the mere pretence of being about something other than a woman’s body. Page 3 is only about objectifying a female form to the male gaze. In an ideal world, I’d like to tackle all the hordes of body-shaming, slut-shaming, misogynistic tripe The Sun publishes but let’s get the blatant, full-page spread out of the way first.