Home › Violence › The Myopia of #BlameOneNotAll 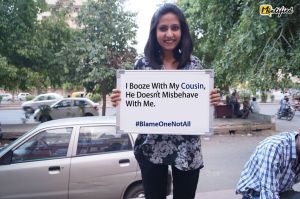 The website Mintified faced recent backlash after promoting their #BlameOneNotAll campaign. The misdirected campaign featured photographs of women holding signs stating that the men in their lives never hurt them.

The confusion seems to have been generated when America finally noticed that rape and sexual assault are prevalent crimes. Just within the last year, major public figures like Bill Cosby, Ray Rice, and Jerry Sandusky have faced accusations with extraordinarily convincing evidence. Violence against women isn’t just in our media consciousness — it is present in every city and town in very real ways. The numbers are shocking — nearly 1 in 3 women will be sexually assaulted, abused, or raped. But the skewed logic of the #BlameOneNotAll campaign prioritizes “lots of rapes = lots of rapists” rather than “lots of rapes = lots of victims.” 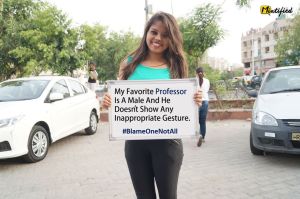 Anyone even a moderate amount of awareness would realize that campaigning against sexual violence and calling all men rapists are not synonymous. #BlameOneNotAll’s patronizing hashtag is insidious — the idea of women congratulating men for not abusing them suggests not only that men need to have some degree of self-control not to rape, but that women should also be grateful for it.

Requesting gratitude and redirecting the issue at hand is damaging to the progress of anti-violence advocates. Startling new statistics name the United States as the #1 country with the most reported rapes, where a woman is raped every 20 minutes. Shocking statistics like this keep us grounded in reality.

But when did “rapist” become men’s default and “not rapist” become a noble identifier to be applauded? Not raping should be a given.

Perhaps the most myopic thing about #BlameOneNotAll is that it discredits a brave uprising against rape culture (which is meant to be about promoting equality and women’s safety) and redirects focus to protecting men’s feelings. As long as we live in a world where the reaction to a high rate of sexual assault is men refocusing the attention on themselves and women replicating the same disjointed message in an effort to ensure that men don’t feel badly, we are a far, far cry from equal. And we continue to be even further from ending sexual violence.