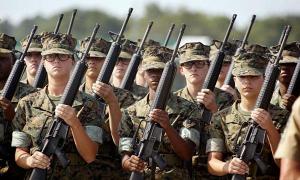 Rape has been in the news lately — from Lara Logan’s sexual assault in Egypt to Justin Bieber’s Rolling Stone interview in which he claims everything, including rape, “happens for a reason.” And as newsworthy as those incidents are, there’s an even bigger story brewing.

Robert Gates and Donald Rumsfeld are being sued over failures to take action against rape reports, which ultimately created a culture in which violence against military women is tolerated.

Rebecca Havrilla is one of 16 brave plaintiffs in a class action suit against the dynamic duo. Yahoo! News explains:

The suit, brought by Washington, D.C. attorney Susan Burke, and filed in the Eastern Virginia federal court, charges that despite ample evidence of the problem, both Gates and Rumsfeld “ran institutions in which perpetrators were promoted; … in which Plaintiffs and other victims were openly subject to retaliation… and ordered to keep quiet.” The plaintiffs, in turn, have been “directly and seriously injured by Defendants’ actions and omissions.”

This is a landmark case. It not only holds high-ranking government officials responsible for these acts, but, perhaps more significantly, it shines a spotlight on an infuriating, common epidemic of sexual assault in our military.

Indeed, these 16 plaintiffs do not represent 16 isolated incidents. Rather,

In 2009 reported sexual assaults went up 11 percent, according to Department of Defense statistics, with one in three women reporting having been sexually violated while serving in the military. The Pentagon itself admits that reported incidents probably represent just 20 percent of those that actually occur. Female recruits are now far more likely to be raped by a fellow soldier than killed in combat. But women aren’t the only victims; statistics from the U.S. Department of Veterans Affairs indicate that more than half of those who screen positive for Military Sexual Trauma are men.

Adding insult to injury, the ACLU finds that only 8 percent of reported military rape cases are ever prosecuted. And I thought civilian prosecution rates were pathetic!

Here’s to hoping for a positive outcome of this case, both for the plaintiffs and the military as a whole; it could certainly benefit from sexual assault training and oversight.

The women who valiantly serve our country should not have to do so in a violent, misogynistic and fear-filled environment.