Home › Violence › This Review of a Book That Contains a Sex Assault Confession Was Banned From Amazon.com

This Review of a Book That Contains a Sex Assault Confession Was Banned From Amazon.com 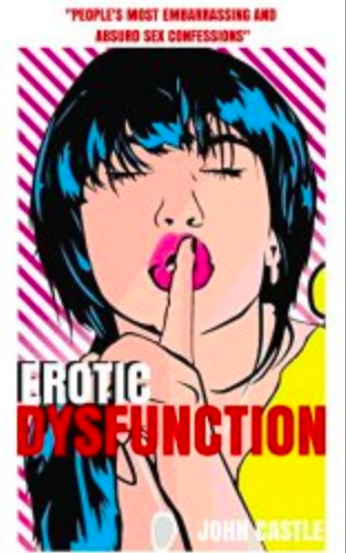 TRIGGER WARNING: This article and pages it links to contains information about sexual assault and violence which may be triggering to survivors.

This afternoon, I got lost in an internet rabbit hole. Someone “followed” me on WordPress, so I clicked on their name to see what they wrote. I was horrified to read the “About” section of John Castle’s blog, eroticdysfunction.com. Yeah, I know what you’re thinking: what did I expect with a name like that? The tricky thing about WordPress is that it tells you who follows you, but not the name of their blog. My horror was increased tenfold when I realized the “About” section was adapted from the “Foreward” of John Castle’s book, Erotic Dysfunction: People’s Most Embarrassing and Absurd Sex Confessions. And I just about threw my laptop out the window when I read Castle’s review of Diary by Chuck Palahniuk, which opens with hate speech pretending not to be hate speech: “I was kind of sad when I found out that Chuck Palahniuk was gay. I don’t know why. I don’t hate gay people. It’s just that…why the fuck are you gay? You could be my hero. But I could never tell my future kids that my hero was gay.”

I waffle between ignoring people whose viewpoints promote misogyny and hate, and confronting oppression. Half of me hears my mother’s voice saying, “don’t give them the attention, they don’t deserve it.” The other half thinks he deserves a scathing critique—from both a feminist and a writer’s viewpoint—and he deserves to be called out as a misogynist.

I thoughtfully reviewed Castle’s book, submitted it to Amazon, and promptly received an email saying that my review was deemed too inappropriate for the internet. Probably because I quoted some of the book, such as this gem of a sentence: “Reken and I decided on that night that if we picked up a girl, we would violate her by fucking her simultaneously.”

If Castle can post this on WordPress, promote it on Twitter, and sell it on Amazon, I can use the word “fucking” in context in a review:

The term “erotic” comes from the Greek root of eros—desire. “Dysfunction” is defined by a “deviation from the norms of social behavior in a way regarded as bad.” This book is disappointingly short on desire, and long on dysfunction. John Castle set out to collect stories of sexual mishaps and wound up with a hundred, choosing to go for quantity over quality (the excerpts could use a proper editor, and Castle’s excuse that “voice is more important than any technicalities” smacks with laziness). As he writes in the book’s “Foreward,” these are “supposed to entertain you but it might also teach you something about life.”

What this book taught me: John Castle is a misogynist. This book is a waste of $2.99, not to mention my time. And I never ever want to run into John Castle, especially in a bar.

Why, in a culture so inundated with stories of sex (I recall reading embarrassing stories in the pages of women’s magazines when I was a teen), does John Castle feel compelled to share more cringe-worthy tales? “Because people’s audacity and honesty sparked something in me.”

The “audacity” doesn’t come across in the stories, many taken so out of context they leave the reader saying, “so what?” As in, you got caught having sex…so what? The “honesty” is questionable; there isn’t enough detail or stakes in each short to give the reader an incentive to suspend disbelief long enough to be entertained.

For those readers who might say, “oh, you just don’t get it.” Rest assured, I get it: we all have embarrassing sexual encounters, so let’s share them, because sex can be humorous and heartwarming and weird and I’ll ultimately finish this book feeling more connected and less alone! Sex!

But there’s nothing particularly funny about the stories, least of all the author’s own. The “audacity and honesty” sparked something nasty in John Castle, who recounts his most embarrassing sexual encounter in the “Foreward.” At twenty, he went to a bar with a friend, the intention being to get drunk and “violate” a random woman “by fucking her simultaneously.” It’s part of a “revenge” for his friend’s most embarrassing story, when he was violated and “’raped’” (Castle’s quotation marks, not mine) by women.

First, Castle belittles his (supposed) friend’s sexual experience of being forced into sex (the very definition of rape, if you want to get technical) with his usage of quotation marks. (If he set out to directly quote what the friend says, it doesn’t read as such. Better example: Reken said, “I was raped. I felt violated, and I wanted revenge.”) Then, he’s brutally honest about the intention to fuck the daylights out of this unsuspecting, intoxicated woman. He seduces her into going to a hotel room with him. She’s obviously uncomfortable with his friend’s presence. But wait, none of this—the misogyny, the abuse—is the embarrassing part. What’s “embarrassing” is the sudden onslaught of “whisky dick” that results from Castle having too much to drink. The thoughtlessness of the book is prevalent in what Castle doesn’t say here: that his “whisky dick” could have been attributed to feelings of guilt, remorse, or a sudden change of heart as he realizes he’s fallen for his woman. But that would be too heartwarming, too close to desire, and further away from dysfunction.

The end of Castle’s “Foreward” elaborates on the structure of the book, namely the “breaks” between stories, comprised of skulls and quotes like Kurt Cobain’s “It’s better to burn out than fade away.” Irrelevant, if not utterly confounding—especially given that the quotation comes on the heels of a story about people having sex so loudly that everyone at the party downstairs comes looking to see what all the racket is about. Castle explains that these skulls are a reminder that we all die, and the quotes are something to ponder. Mostly, I’m left pondering their relevance to the work as a whole. There’s certainly nothing erotic about the stories, the “breaks,” or the relationship between the two. The stories are completely lacking in emotional intelligence, empathy, intimacy, and feelings other than physical sensations and embarrassment. Since the breaks don’t speak to the stories themselves, I’m left with the notion that they are supposed to add to the overarching theme of dysfunction.

Lastly, Castle leaves the reader with some deep wisdom to consider: reading is an escape, “but eventually we need to face the music. Make our own stories. And live to tell about it.” It’s unclear if the author is advising readers to put themselves in compromising situations. A less discerning reader might take Castle’s advice and follow in his footsteps, seeking a night of debauchery with heavy doses of misogyny and chauvinism. A discerning reader would take one whiff of Castle in a bar and call the police.

About the author: e.v. de cleyre is a semi-nomadic writer, passionate feminist, and avid traveler with a penchant for languages. She’s hitchhiked around Ladakh, resided in Lhasa, and explored Laos and Thailand via the Mekong; but her latest adventure is an MFA in Creative Writing, with an emphasis on female authors in contemporary long-form travel literature. You can find her at evdecleyre.wordpress.com, and on Twitter @evdecleyre.