We are now exactly one month out from the Supreme Court ruling on Burwell v. Hobby Lobby, and we now know what life is like in a world where corporate persons have rights and people persons, especially women persons, do not. I’m pissed. You pissed? I’m real pissed…

As we know, this case allows closely held corporations to refuse to provide contraceptive coverage to their employees as a part of their negotiated health benefits if owners have religious objections to contraception. Since then, there has been overwhelming coverage in the blogs and on Twitter, making it clear just how out-of-touch this ruling is with the lives and needs of American women.

Not only does this case take corporate personhood to a new level, where corporations may now act based on their “strongly-held religious beliefs,” (because corporations have thoughts and feelings and internal organs now…) but it represents the latest frontier in conservative effort to undermine the universality and efficacy of the Affordable Care Act and restrict women’s reproductive health access.

How does this affect contraceptive choice for women in the US? Plain and simple – without access, there is no choice. And when women don’t have access to affordable contraception regardless of the opinions of their employers, a central healthcare need isn’t being met.

In the wake of this decision, what can average (and enraged) American citizen do to send a clear message to justices, policy-makers, and “corporate persons” responsible for this decision?

Let’s make one thing very clear: This case is not about religious freedom, but rather religious extremism and discrimination. Houses of worship are already exempt from the requirement, and religiously affiliated not-for-profits are eligible for an accommodation that ensures they do not have to pay for or directly provide the coverage to their employees. Further, this case is already being used to discriminate against LGBTQ employees.

And while basic science about reproductive health didn’t matter in the ruling of this case, there are several myths that have made this case seem less serious and far-reaching in theory than it is in practice. No, birth control isn’t cheap and easy to get without health coverage. No, condoms aren’t the solution. Access to contraception has a long, tortured history in this country worth learning, and this is just another chapter.

Thanks to organizations like Planned Parenthood, women can call a free hotline to find out more about how this ruling affects their contraceptive coverage.

This important legal precedent was set by 5 men. It comes as no surprise that the ruling doesn’t represent the views and needs of millions of women. What can we do about this? Make your voices heard.

NARAL, Ultraviolet, Planned Parenthood and Planned Parenthood Action Fund, Physicians for Reproductive Health, and Kristen Gillibrand all have petitions ready for your signature. Anyone can call her/his Senator with a quick click.

Sign them all. Send them to your friends. And let the White House know how your call went.

Come November, we need to show collective support for progressive, pro-choice women in the House and the Senate. ICYMI – Congress introduced two measures last week, one of which was struck down by Republicans: Women’s Health Protection Act and Protect Women’s Health from Corporate Interference Act.

Women like Patty Murray, Barbara Boxer and Tammy Baldwin are poised to fight for women’s access to affordable reproductive health care. Sign the “Draw the Line” Petition, and let them know you have their backs. Additionally, Kelly Ayotte of New Hampshire and Deb Fischer of Nebraska were the only two women in the Senate to vote down the Protect Women’s Health from Corporate Interference Act. Hold them accountable.

Not surprisingly, three of the four judges in the dissenting opinion were Justices Sotomayor, Kagan and Ginsberg, the three women of SCOTUS. They stood up for women’s reproductive health and rights, and delivered a blistering dissent. In fact, it took one day for Ginsberg’s prophesy about the reach of the case to come true, as the court indicated that companies can object to all twenty forms of birth control included under the ACA, and not just the four methods raised in the case.

And when you get so frustrated at how spot-on Ginsberg’s opinion is (YET AGAIN), go ahead and sing the Ginsberg dissent song. It will make you feel better.

Don’t have millions of dollars to show your influence like a corporate person? The overwhelming majority of American citizens don’t either. But you can buy like a person person, and make a nice list of the 82 companies who are dropping contraceptive coverage. Check it twice next time you go out to buy goods and services, or next time you give donations (as many on this list are non-profits). Yes, many of them are packaging companies and car dealers and construction companies, but this list could grow. 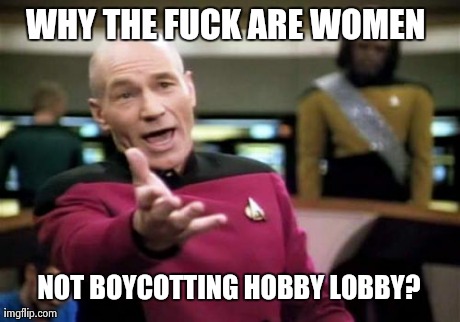